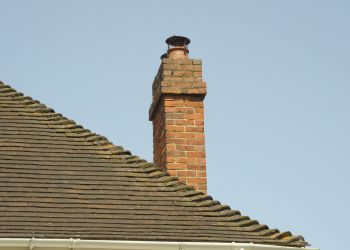 A Brief History Of Chimneys, Chimney Stacks And Chimneys Pots

Chimneys have been an important part of buildings for centuries – particularly in colder climates where there is a need to retain heat but remove smoke, and prevent downdrafts. In British architecture, they were first found in castles (often these were just a simple chute with plain openings), and then in manor houses.

It was in manor houses that the first of what today would be called chimney pots appeared. And in the Tudor period it became fashionable to have very ornate brick chimneys and stacks. While much simpler versions of chimney pots became common on ordinary homes around the Elizabethan period.

A chimney is the entire structure that carries off the smoke from a fire. Rather oddly, to modern eyes, some early chimneys were made from wood – until the practice was outlawed by early fire prevention laws.

According to the Oxford English Dictionary, ‘Chimney’ originally meant a fireplace, and is thought to be derived from the Latin Caminus, meaning furnace, forge or oven. In Middle English it was ‘Chimenee’.

In modern English, a chimney stack is understood to be the part of the chimney or flue that is visible above the roof. However, originally, these were called chimney stalks, and a cluster of stalks was called a stack.

The Victorian era was the ‘Golden Age’ for chimney pots. This is largely thought to be due to the amount of identical terrace houses that were built during this period – which led to people using chimney pots as a way of personalising them.

Even though there were literally thousands of different designs of chimney pots there are surprisingly few books on the subject. Indeed, ‘Chimney Pots and Stacks’ by Valentine Fletcher, published in 1968, is believed to be the first specialised book on the subject. And this was at a time when the Clean Air Act and gas fired central-heating meant log and coal fires in homes were going out of fashion – together with the need for chimneys and pots.

Valentine Fletcher coined the word ‘Caminology’ to denote the study of chimneys. However, there doesn’t appear to have been many (if any) later studies on the subject, and the word does not appear in the Oxford English Dictionary.

Although many of Hatfield’s old buildings were demolished to make way for the postwar New Town, there are still enough old buildings in and around the town to see a varied selection of types of chimney pots, and ornate brick stacks. And they are still being added to houses built today.

Chimney pots have been used in Britain since at least the 13th Century. They are usually made from clay or tin. Chimney pots are known as ‘cans’ in Scotland, and ‘tuns’ in south west England.

Chimney pots serve a purpose although not everyone appears to have adopted them as chimneys without pots were common in East Anglia.

1. Increase the speed smoke rises by reducing the size of the outlet – warm air rises so this ‘bottleneck’ can create a jet-like effect.

2. This reduction in the size of the opening also reduces the entry of rain and downdrafts of air that can prevent the smoke leaving the building, and scatter hot embers from the fire.

3. Openings in the pot – like louvres, grills, pockets and horns – can promote cross-drafts at the top, which also serve to increase the flow of smoke up the chimney.

4. Changes in the roof or neighbourhood (growth or felling of trees, or other buildings being erected) can impact on the efficiency of a chimney. Chimney pots are a simple way of raising the level of the chimney (Tallboys – a type of chimney pot but also the name given to a type of wine glass, chest of drawers, and a 6-ton WWII RAF bomb – can be up to 7 feet tall).

Clay pots tend to come in three main finishes: terracotta red; terracotta buff or salt glaze (a ceramic glaze created by throwing salt into the kiln at the hottest point during firing – the sodium in the salt combines with silica in the clay to form a glassy coating of sodium silicate, which acts as a weatherproofing and extends the life of the pot). Some salt glaze pots can also be considered to be stoneware (basically any pottery fired to around 1,200 degrees centigrade). Although, strictly speaking, as stoneware is waterproof it does not need a glaze.

Terracotta (Latin for ‘baked earth’) generally refers to any fired clay that changes colour during the process and becomes anything from dull ochre to red.

Rarer to find are black and Staffordshire Blue finishes, although there are pots still being made with these finishes.

Firstly, the sheer number of different designs. Many were one-off creations which were not catalogued. The Chimney Pot Museum – at Longport, Stoke-on-Trent – has a collection of over 2,500 pots. The National Clayware Federation’s 1964 catalogue contained nearly 500 designs of chimney pots which had been in use for a century or more – at a time when domestic fires, chimneys and pots were rapidly going out of fashion.

Chimney pots have some exotic names – like Weemac and Spiral Captain, and different manufacturers may call the same design by different names – like Smoke Cure and Champion.

Even today, nearly 50-years on with coal and log fires now something of a rarity in the average home, suppliers offer over 300 different designs.

When viewing chimney pots from the ground or a distance it is not always possible to tell whether it is a single piece of elaborate design or a combination of components (like a pot with an addition of a louvre or cap, or simply two pots joined together for added height). Also the style of the base may not be visible, which also hampers identification.

Pots are flaunched (also spelt ‘ flanched’) in place on the stack. Basically, this means the cement or mortar slopes inwards towards the top of the pot so rain drips off rather pools around the base.

Water entering cracks in the pot, which naturally occur over time with the expansion and contraction due to temperature changes, will freeze and expand during winter and eventually shatter the pot.

As a result, chimney pots that became largely redundant due to the installation of gas-fired central heating, were later thought of as a nuisance to maintain and a potential health and safety hazard. Sadly, this has led to several pots being removed or cut back to stumps (and sometimes capped).